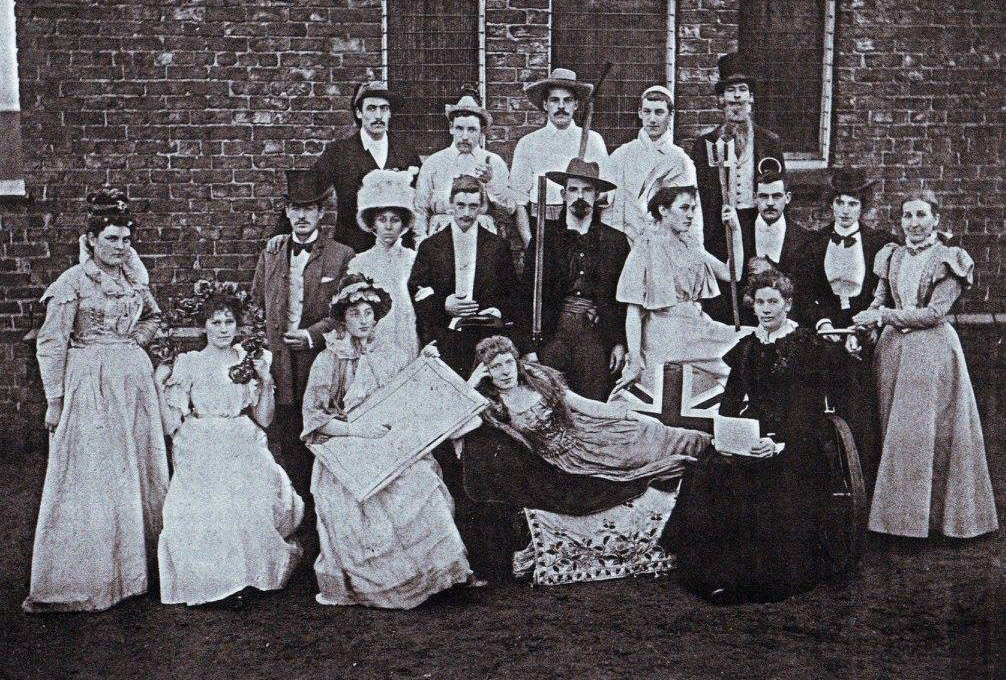 During 1920/1921, a group of local Dunham Massey residents who were keenly interested in the arts decided to produce a play for the entertainment of the village. It was so enthusiastically received that a suggestion was put forward that a village amateur dramatic society should be formed.  On the 12th December 1922, a meeting was convened in Little Heath School (later to become Dunham Massey Village Hall), and The Dunham Thespians was born. 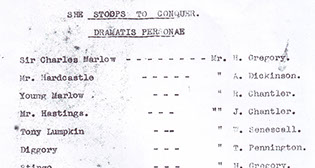 "To develop drama and produce suitable plays for juveniles and adults and encourage dancing, music and art in general."

The first production was "Dick Whittington", performed in Easter 1923 by the junior members. In 1924 the senior members staged their first play entitled "A Winter's Tale". It was an ambitious undertaking, but extremely well received, and recorded a very healthy profit for the time of £16, which was divided between local causes such as the Church and the Women's Institute.

After a very successful first twelve months, the society had 30 senior acting members, and 18 junior acting members. In the years that followed, many more successful plays were produced, including "She Stoops To Conquer", "A Scrap Of Paper", and "The Joan Danvers". Rehearsals were mostly held at the acting members own homes; scenery had to be prefabricated and transported to the school on the night of the show; and the stage was lit by a single gaslight.

In 1929, Mr H. Arnold resigned as Chairman (he would later become President), and during the next few years the society endured a difficult time, with several resignations from the committee. In 1933 a general meeting was held to decide whether or not the society should continue. A tiny majority vote of just one ensured the society was to continue, and a new committee was elected with Rev. C. Meade as Chairman.

In 1936 several social functions were held in order to raise funds for new curtains for the stage. These were eventually purchased at a cost of £10 for fully lined black velvet curtains. In 1938, electricity was introduced to the village, and the Stage Manager, Mr W. Bromage, made the first switchboard in the school allowing the introduction of a lighting rig.

By now, the society had become a bedrock of the village, and had so many acting members that a selection committee had to be formed to ensure parts were fairly distributed. It appeared that the society would go from strength to strength, but in 1939 the country was to find itself at war, and The Dunham Thespians were temporarily disbanded. 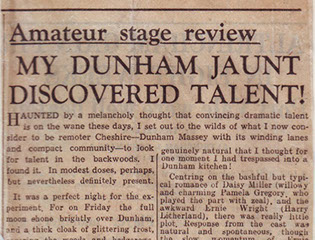 It would be June 1946 before a meeting could be held to consider the fate of the society. Thankfully it was unanimously agreed that it should continue, and a new committee was appointed with Mr F. West as Chairman. Productions were transferred to the Methodist Chapel, and an application was made to the Men's Institute for the use of a room for rehearsals. An extension to stage in the chapel schoolroom was built, and the first post-war production was three one-act plays in November 1947. Profits from the production were handed to the chapel as appreciation for the use of their schoolroom.

There were so many acting members involved that it was agreed that the society should produce two plays a year in order that everyone had a better opportunity of getting a part. The society continued successfully for several years, but in 1951 the popular Mrs Hanton, who had been Producer since the society had reformed, had to tender her resignation as she was leaving the area. It would prove to be a difficult couple of years, with a reversal of circumstances meaning acting members were few, and other valued members Mr & Mrs F. West, Mr & Mrs F. Duckworth, and Mrs Chorlton also tendered their resignations as they too were all leaving the village.

The society continued under challenging circumstances, but in 1957 the Methodist Chapel was being used for a variety of other social activities, meaning the permanent stage extension had to be removed. This meant it no longer represented a suitable venue for putting on plays, and so productions halted and the society was once again temporarily disbanded.

In the years that followed, a Management Committee was formed with the intention of carrying out alterations to Little Heath School for conversion to a Village Hall, and the committee asked all the local societies to assist with donations. The Dunham Thespians donated all of their funds on the agreement that when conversion was completed and facilities available, opportunity would be provided for The Dunham Thespians to reform and perform at the hall. 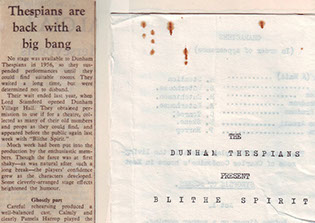 In 1964 it was announced that the alterations to the hall were nearly complete, and that adequate stage facilities would be made available. A general meeting was held, and it was unanimously agreed that the society should reform, and a new committee was elected with Mr A. Cowsill as Chairman. Following a request from the Village Hall Management Committee, it was agreed that The Dunham Thespians would produce a one-act play for the official opening of the Village Hall in January 1965.

Social activities were held throughout 1965 to raise money for the society, and Mrs Chantler made new draw-curtains for the front of the stage - a mammoth undertaking that earned the gratitude of all. In May 1965, the first major production of the society since reforming was staged. Mr & Mrs Duckworth had returned to the area, and after much cajoling, Mrs Esme Duckworth agreed to act as Producer. "Blithe Spirit" was a huge success, owing much to the hard work of Mr Bill Bromage, who designed lighting effects including an ultra-violet light which picked out the costumes of the 'ghost'.

The society worked hard over the following years to improve the facilities for the hall, which included £10 in 1967 for the purchase of new foam cushions for the chairs, and £60 in 1969 for Mr Bill Bromage to install a new lighting rig. By 1970 the society had raised a total of £200, and it was agreed that £100 of this should be placed into a Building Society account.

The society went from strength to strength, with Mrs Esme Duckworth at the helm as Producer. In 1977, her husband Mr Frank Duckworth would take over as Chairman, where he would remain until he stepped down in 1999. Mr Clive Alford was appointed, and Mr Frank Duckworth was given an honourary title of President. Also involved were Mr Ron Hutchinson (who had been involved in the society since it reformed after the war), and his wife Mrs Gina Hutchinson, who appeared in around 50 plays, as well as producing many others and ultimately becoming Chairlady in 2003 when Mr Clive Alford stepped down. 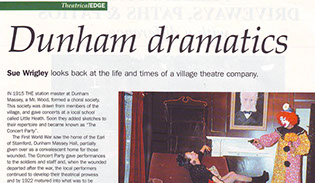 The Dunham Thespians has produced on average two plays a year since the mid-60s, sometimes with extra productions by the young members of the village. The popularity of the society grew as its reputation for professional but fun productions spread, and it continues to be an integral part of a thriving village community which includes The Village Hall Committee, The Rose Queen, The Women's Institute, The Tennis Club and many other societies and social groups.

In 2011 Mrs Gina Hutchinson stepped down as Chairlady, and the current serving Chairman Mr Martin Clare was appointed. The small but dedicated group of current members continue to make the society thrive, with notable recent productions including Shirley Valentine (2002), Hobson's Choice (2006), Private Lives (2008) and Jane Eyre (2016). The Dunham Thespians have come back from the brink on more than one occasion, and the hard work and dedication of so many people (far more than can be named here) have allowed it to endure.

The year 2022 will mark the 100 year anniversary of the society. 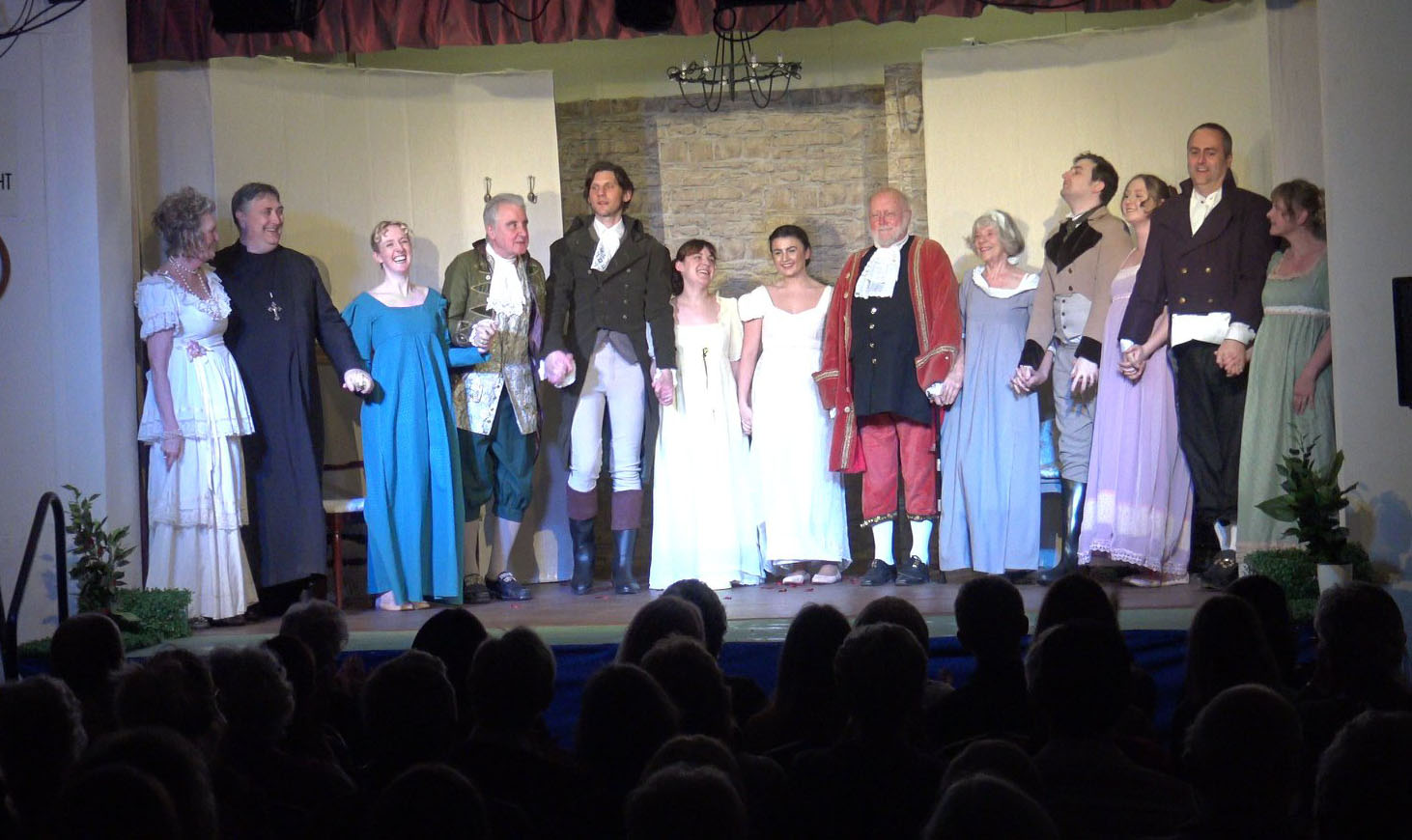